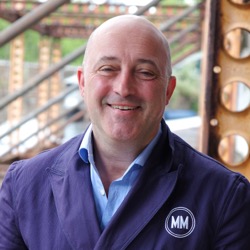 Are you wondering what’s next for out-of-home dining?

And food retail in general?

If so, you must listen to this conversation with Andrea Rasca.

A food entrepreneur for 30 years, Andrea is now shaking up how the sector works.

That means changing what we eat.

And how food is produced, distributed and sold.

Put simply, the former Eataly executive is on a mission: to change everything to do with food.

In fact, he doesn’t call Mercato a business…

He calls it a movement.

So in terms of nuts and bolts, what is Mercato Metropolitano?

As you’re about to hear, it’s what Andrea describes as a ‘platform’.

As he explains in today’s talk, its role is to create the infrastructure upon which independent artisanal food operators can trade (and flourish).

For example, at a given site, Mercato takes on the lease, does the basic fit-out – and handles all side-wide operations.

That frees an individual stall holder to concentrate solely on what they know best:

Andrea says that because this maximises food and drink quality, the stall-holder is able to make more sales.

And consumers get better food (plus a more enjoyable dining experience).

As you’ll hear, this platform approach is delivering incredible results.

For example, in 2016, Mercato launched its first London site.

It was on 4500 square meters of forgotten industrial space in (then) unfashionable Elephant & Castle.

In 2019, that site drew in FOUR MILLION people.

No wonder smart commercial real estate owners are now banging on Andrea’s door urging him to set-up inside their properties.

After all, a tenant like Mercato can do amazing things for your nearby retail, office and residential spaces.

So which property businesses have partnered with him so far?

And in 2020, LendLease is bringing the third Mercato Metropolitano into its new mixed-use development, Elephant Park.

2020 will also see Andrea partner with Redbridge Council to open his fourth London site – on a former car park in the East End neighbourhood of Ilford.

As you’re about to hear, sites are planned for cities including Paris, Berlin, New York and Miami.

Andrea has amazing stories to tell. Listen to him now and you’ll learn: